Our Andouille is the cornerstone of our business.  It is all natural pork, hand butchered and coarsely ground.  We use only natural beef casing.  Each link weighs between 1-1.5 lbs.  We do not use any preservatives, additives, or artificial flavors in our Andouille.  Our Andouille smoked for hours with real wood smoke.  It is fully cooked.

Andouille was brought to Louisiana from France in the 1700’s.  Traditionally it was made from organ meats and other parts as a way to use all pieces of the animal and not waste anything.  When the Germans settled in the River Parishes outside of New Orleans, they brought many things to area that was originally settled by the Acadians.  They brought their own traditional sausages and smoked meats.  Although they were German, all business in South Louisiana was done in French so they adapted their sausage for the local customers.  So the Andouille of the German Coast is a German Sausage with a French name.

Traditional dishes in which we feature Andouille are Gumbos, Stews, and Jambalayas.  We also cut it thin to fry as chips, we use it in pasta sauces, soups, on salads, charcuterie boards, or any other way that we can imagine. 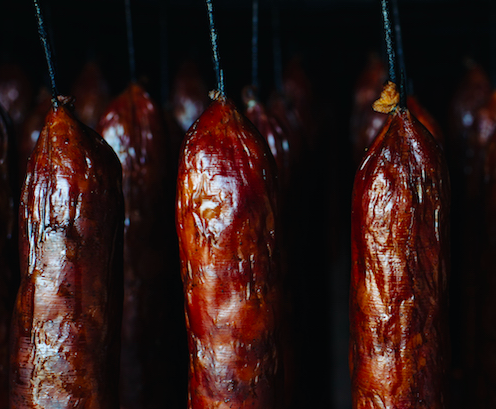 Check us out on TV and online!